Long-held wisdom suggests never working with kids or animals in the movies. But Split Screen’s experience happily debunks that. We do it often, successfully. And our directors are seasoned professionals known for their special knack working with two and four-legged babies.

Finding the right talent is key to bringing your script to life, and Split Screen will go to exceptional lengths to track down the perfect kid, or in a recent case, the perfect dog.

For many years, Perth agency Ad Impact has created memorable and fun TV commercials for their client Midalia Steel, featuring the famous talking blue heeler, Bruce. His legendary “mmmmate” catchcry became a much-loved feature of Western Australia’s advertising landscape, but had not been heard for some years.

Then a call came in from Ad Impact to our Split Screen Senior Producer Lee. They had a script for a Midalia Steel TV ad that would reintroduce our famous “mmmmate” Bruce the blue heeler.

The problem? Well, Bruce had not been featured for several years, and the original Bruce was now too old to get back on set.

So the search was on for an all-new (but still the same) blue heeler to be our Bruce.

Lee engaged her trusty local animal trainer Nigel to assist, and both were on the lookout for the perfect mmmmate. In a moment of sheer serendipity, Nigel was in Gidgegannup, driving down a road he’d never travelled before.

At that precise moment, along that road was a woman out walking her two gorgeous blue heelers. In a twist, she’d never walked that way before either.

Hoping desperately that she wouldn’t think him inappropriate, Nigel stopped and approached her, explaining that his real interested was in her dogs! Pleasantries were exchanged and photos of the blue heelers were taken and sent on to Lee,

The very next day, blue heeler Rocket was ‘advised’ of his success: he’d been confirmed by the client as the brand new Bruce – a mmmmarvellous outcome.

Two weeks of training followed for Rocket, and he was ready to join the Split Screen set. Totally at home among the lights, cameras and action of the shoot, Rocket performed like a pro in take after perfect take.

And so a mmmmost talented new star was born.

Need talent for your shoot? Split Screen will find you the best match whether that’s kids, animals or grown-ups. And we’ll pull your entire project together just as smoothly. Give Lee a call or drop her an email now.

You can see the new Bruce in action here.

We're not around right now. But you can send us an email and we'll get back to you, asap. 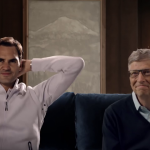